It was a somber sight, the deceased comedian being carried out—invisible—in spirit by a group of hands with downcast eyes we know well and understand, they’re different. 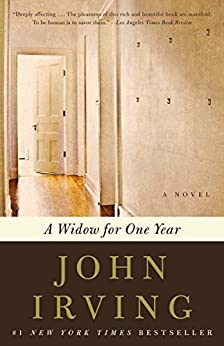 Recently, in 2019, I read John Irving’s novel A Widow for One Year—over twenty years after its original publication in summer of 1998. The intriguing jacket and fat, hardcover edition I found in a workplace breakroom library appealed to my senses more than others—more than all the previously-read books distributed around the room. It also caught my attention that the dust jacket prominently featured one review quote on front which stated:

I’d venture that most in or around my age group have either seen or read (or both, as I) The World According to Garp.

Younger at the time, I remember thinking of Garp (the 1982 film) as a protracted, emotionally-complicated, dramatic event . . . featuring the famous Orkan Mork. It was a little strange. (I was eleven.)

Later, I read the book as well to recall and compare my impressions of the film.

In the eyes of an early 80’s era 11-year old, the idea that some adulthood is experienced in such unexpected and tragic ways and means can have a fairly big impact on a young person’s perception of what being an adult is: not all ‘driving the car’ and ‘doing what you want’ but what it means to affect lives, including the lives of children who often succumb to afterthought.

They are afterthoughts in those tragic and otherwise life-changing moments . . . those scenes in these stories . . . in the way that other people and things may become effectively invisible to us when we are immersed in a state of emotion too great for normal mental capacity.

These are the kind of experiences encased in the covers of these John Irving novels, experiences which bring immense, at times insurmountable challenge and change to life.

If This Then That

Maybe now you have a more visceral idea of my own reaction and reason for picking up this 2nd book by Irving . I stood in the break library, reading the front flap, the back, noticing that specific review on the cover of Irving’s A Widow for One Year and realizing: this novel (written twenty years after Garp) was likely to be another gripping family chronicle set in an ever-encroaching life that must be mastered—a story made interesting, approachable, and digestible through its remote disclosure set in familiar scenes, some which amplify the worst that could happen.

Don’t be deterred by the idea of depressive tragedy all alone. These stories are about coping, as people do. Getting through is the great expectation, and is a promise of humor and hope as these characters—representing real life in fiction—resort to their ways of getting through and finding the other side of life. Essentially, these stories identify with and inspire us.

I’ve spent the past five years studying the practices and productivity trends of WFA companies. The upsides—for individuals, companies, and society—are clear. Let me outline them.